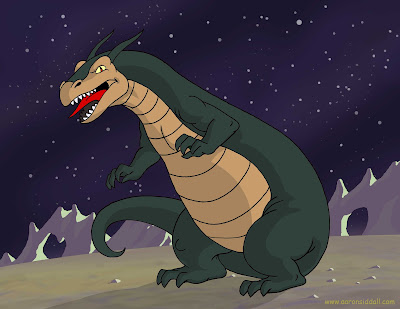 The Asteroid Dragon or "Rock Knucker" is a predator found on rocky moons and rugged worlds along the fringes of known space. How these monsters have managed to make it to so many worlds is a mystery, but the prevailing theory is that big game hunters and zookeepers have transported them for their own purposes. These monsters are a particular nuisance to colonists, as asteroid dragons are rapacious predators that will eat anything and everything they can catch.
Asteroid dragons are 16-25ft long reptilian monsters somewhat resembling a dinosaur or dragon from legend. Though reptilian in form, asteroid dragons are warm-blooded, allowing them to hunt a wide range of habitats, though they hate damp places such as forests and swamps.
Thankfully, these creatures are amazingly stupid, and can easily be baffled with electric fences and other tricks. The remarkable metabolism of an asteroid dragon renders it an immunity to all known poisons and disease, though they are host to a dreadful variety of harmfully septic bacteria.
AC: 20, HD: 12d8, THB: +12, Att: 2D6/2d6/3d8, ST: 7+ (Survival), MV: 6, SPC: Cause Fear, Disease, Immunity (Disease, Poison), Stupidity. XP: 1,000

Space Ranchers
An asteroid dragon has been stalking a herd of terran cattle on the outskirts of a colonial settlement. The big lizard has been nabbing cows, eating them bones, horns hooves and all to the distress of the local ranchers. The X-Plorers team is contracted to find and kill the beast.

Big Game Hunter
A corporate executive who likes to play big game hunter has hired the X-Plorers team to help him bag an Asteroid Dragon to mount on his wall. The players characters not only have to find a wild Asteroid Dragon, they need to "help" the exec make a kill without killing the beast themselves.
To make this even more difflicult, the exec isn't a very good shot, preferring flashy guns and high-tech gear to actual skill. So the team has to not only worry about the beast, but their employers collateral damage as well.
Happy hunting!